Description of the game

You are the Supreme Commandant of a newly formed Soviet country you are tasked with planning its every detail from hosing, infrastructure, industry, supply chain and trading with the ultimate goal of being a fully self sufficient glorious socialist nation.

The name raises some questions, such as why a Socialist theme and the developer explains this front and center on their website.

There is nothing special about the graphics, they are in fact pretty basic for the most part, this is not a ultra realistic, “I can’t believe its not butter” simulation of real life visuals and I could absolutely care less.

The art style plays well to the idea of a grungy, 1960’s Soviet Bloc country.  Everything pale, white, grey and brown are the pallet choices of all the decorators in the Soviet Republc and it works, and complements the fact that efficiency trumps everything else.

Earlier we said it was a City Tycoon game and technically yes you build a city however the absolute scale of this game is unprecedented, you are given a massive area of land that can easily support dozens and dozens of cities and with enough time and skill you can builds a glorious interconnected country, multiple industrial and population centers all intermingled with highways, railways and busses.  This is, the closest any city builder has gotten to Minecraft, open ended gameplay, almost unlimited space for creativity, tools with no general direction or wire guided experience, you are truly open to do what you want.

Much like any other city builder you place buildings, in this case residential prefab/brick housing complexes that support 20-150ish workers.  They have families that needs schools or they cant go to work and happiness has a direct impact on the productivity of your population.  There is however a difference as industry, resources and supply chain are the absolute main focus.  People are even treated more like a resource needed for a plant or mine to function.  How you design your city to move people to the correct places for work, and how you move raw materials to factories for processing and how these goods are exported are the main focus of this game and it’s challenging but beautifully addicting.

Here is a screenshot of my latest city, farming capitol, Volunceava. 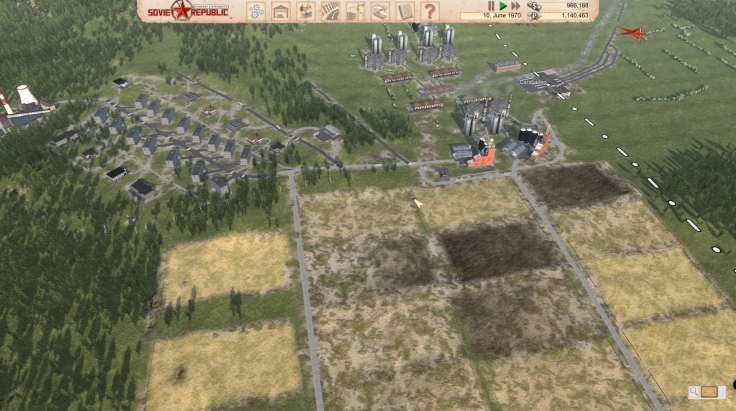 1000 glorious brothers and sisters of the Soviet nation, with a less then 1% unemployment rate, all dedicated to the farming of crops in support of a massive effort to export alcohol to a neighboring Soviet bloc country for the purposes of profit.

There are many problems, little to no in game assistance except for a small help section, very little instruction of how the buildings work with one another but it has been fun learning all the different industries, their respective buildings and slowly learning the game.  I have built many starting cities dedicated to one industry to learn it, such a a town of a population of less then 200 to support a massive oil industry that doesn’t require many workers, logging, coal, gravel, iron and steel export.

One of the nice touches to this game is the ability to be self sufficient.  Once you have enough industry, new construction can be completely funded by your own raw materials.  You build the necessary construction buildings and machinery so you can build your own roads, buildings and factories.

This is an excellent game, with bugs, unfinished pieces and I look forward to its continued development.  I have put close to 20 hours into this game in 1 week and I can easily see myself spending hundreds of hours attempting to perfect the perfect socialist nation of efficiency.

If you enjoy city builders and are looking for something more challenging, id suggest picking the game up.  I feel it has been money well spent.