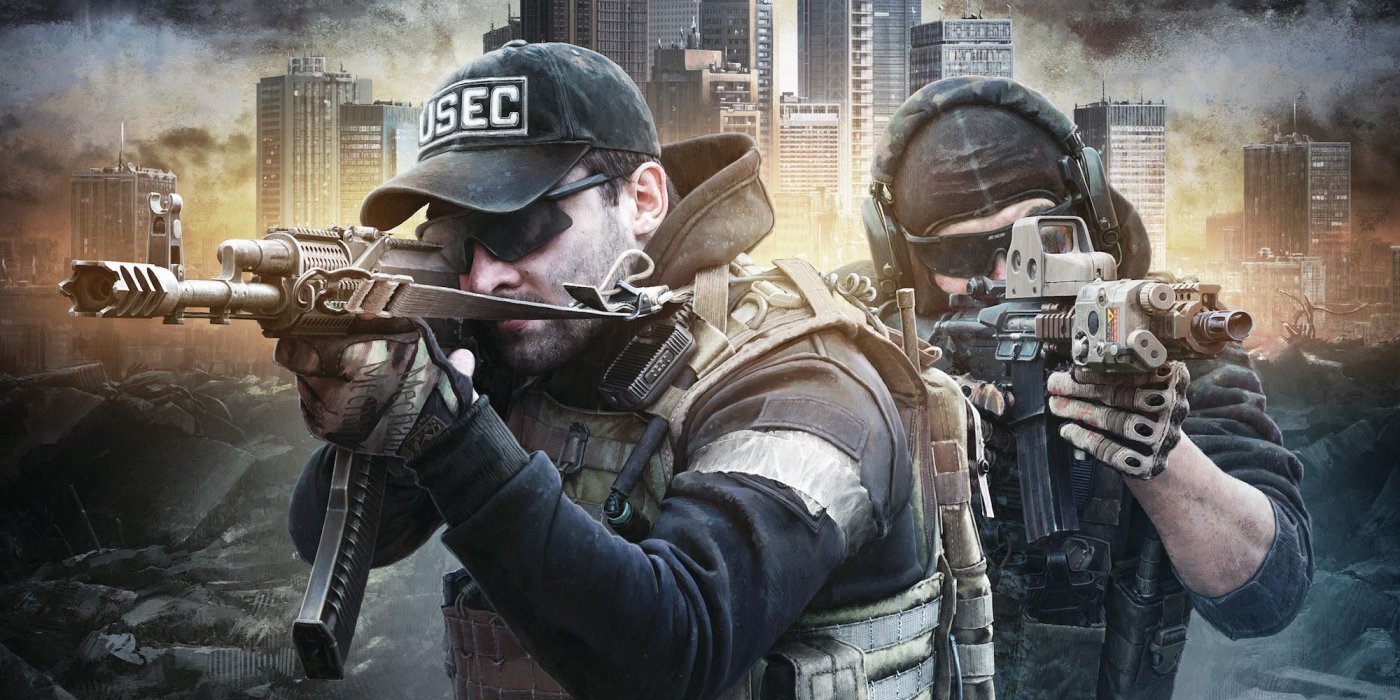 Platform: PC
How was the game received?: Personal Purchase
Genre: Mil-Sim FPS with RPG elements
Release Date: TBD (Currently Open Beta)
Cost: 49.99 – 139.99 USD
Where to buy it: Get it Here!

Escape from Tarkov is an ultra-realistic FPS set in 2028 Russia during a political crisis in the fictional city of Tarkov. This game draws on many genres for inspiration from the Ultra Hardcore category that ARMA tends to be known for, elements that scream Battle Royal and refreshing nods to the RPG categories.

ETF has hit a perfect balance between Ultra-Hardcore realism, heart pounding action while still being a fun gaming experience. This is a very important point as many “Ultra Realistic” shooters of the past, tend to be too complex for their own good, learning more to a Military Sim then an actual game and loosing some of the magic in the process. Ahem.. ARMA..

This game will not hold your hand and is missing any meaningful tutorial however, if you can get over this aspect and begin getting more comfortable with the game there is no other experience like it.

Battlestate games has developed a very in-depth lore outside of game offer a Text-Based RPG on their forums and have even published books. The in game lore progression is more subtle, traders, the people who can sell you gear and items are the primary delivery mechanism for story and lore elements. These traders give you quests to complete with a little explanation to their significance. Needless to say the in game story is light, not sure if this is something they plan to work on, but just exploring Tarkov and piecing together what may have happened while learning tid-bits of information from the trader quests are about all that you get so far. The map design, detail and environment are so well done though, you feel like you are living the experience in real life so, the absence of any major story plot for me, is minor.

Escape from Tarkov has the best, most detailed and believable maps. Period. I had a grin ear-to-ear my first time walking around Interchange, the map of a run down abandoned mega shopping mall.

The designers of ETF went for realism and achieved absolute perfection, or at least as close to it as I have ever experienced.

The amazing lighting system, detailed models and textures does tax even the most advanced PC’s however, since .12 update the performance has improved exponentially and is still very beautiful even on lower settings to accommodate.

The immersion is like nothing I have ever experienced.

The designers of ETF went for realism and achieved perfection.

Tarkov has 11 maps planned with 7 unlocked at the moment. The maps are varied, unique and offer a wide variety of gameplay. Below are the in game maps you can collect to give you an idea of the variety of maps available. ETF offers sprawling outdoor maps, large malls, resort locations and military bases to fight over.

More weapons then I can possibly mention here, all modeled off real world weapons, painstakingly simulated in game even the individual attachments are modeled and even named (when they can get the licensing rights) and they provide a very in-depth system of weapon Modding for the gun nutz in all of us to explore and tinker to our hears content.

Quests are delivered via the traders and offer the ability to help level up your reputation with them to get access to more advanced loot. There is also a public, player driven flea market where you can buy almost anything, for those who do not care about this aspect of the game. The traders will provide fetch quests, or plan quests and others to keep you focused while in a raid and help develop the story as I mentioned above. This aspect can definitely use some attention from the developers, its very basic but does keep you interested.

The RPG elements are very well done IMO. If you do something a lot, you will get better at it, if you don’t do it for a long time, you will get worse at it. There is no points to distribute, if you run a lot, your endurance will go up and you will be able to run for longer without getting winded. If you constantly loot a lot of heavy gear and run while overloaded, you will eventually be able to bare more weight. Its very well done and had dozens of categories from searching for loot, to stress resistance, to recoil control.

They also have an extremely in-depth health system including hydration, energy, blood pressure, bloodloss, fractures, contusions, exhaustion, tremors, headaches etc all effecting your player in different, realistic ways. There is also an in-depth medical system too, bandages, health kits, surgical kits, splints, morphine, pain killers to help mask the devastating effects of combat and allow your player to continue with the fight. If you take on a team of players and trade multiple rounds of gunfire, you may win the fight, but you might also need to spend the next 3-4 minutes stopping bloodloss, repairing fractures and starving off tremors with pain killers, forgot to bring medical supplies? Good chance you’ll bleedout on the battlefield.

They have implemented one of the best bullet ballistic systems I have ever seen, ammo type, range, velocity, angle, ricochet chance, armor type all matter. They are meticulous with their hitboxes also, if someone is wearing a level 5 helmet with full metal face shield but you manage to thread the needle with a bullet though the eye slit? You best believe they’re going down.

Escape from Tarkov is an instanced based Battle-Royal lite mode with PVP and PVE elements. ETF pits players against each other and AI while also allowing the player to extract at special locations whenever they wish, so this is not a last man standing game a more methodical careful rhythm with explosive PVP and PVE action. And they do it very well, its addicting and keeps you coming back for more. Some of the most intense, heart pounding moments gaming have come from Tarkov.

You begin each raid by preparing your Main Character also known as a PMC. You use items from your stash or ones you have bought on the market to deck out your character. What you bring is up to you, but if you don’t survive, you lose everything except the items in your container. This Alpha, Gamma container is for stashing the most valuable loot you find in Tarkov.

You then pick which map you want to play. Maps have dynamic time and weather and give players (2) options, typicaly daytime and nighttime to pick from. Depending on the map you will be matched with 6-12 other PMC and 10-20 SCAVS which are AI controller and in some cases Player controller. Every 10min you get to play a SCAV with a random loadout, this SCAV doesn’t contribute to the XP or skills of your main character, you get their weapons randomly and for free and if you survive you get to keep anything the SCAV finds or has on them.

Once in the Raid you can do what you choose to, your character will be given 1-6 extration points, these points are for leaving the map and you are free to do so at any time, however there is also a map timer so which depending on the map is 30min to 90min long. If you fail to leave before the map expires your character is lost and you lose everything.

If you like looting, ETF has you covered, aside from being able to take anything off players or SCAVS you kill, you are also able to loot hundreds of different locations, secret compartments and even area’s that require you to find special keys. There are many community made maps that layout all the various locations. Loot is randomly generated so its not guaranteed you will find any specific thing which keeps it interesting.

The one area that took a little getting used to was the controls. There are many more controls then in a typical FPS. This extra options allows for things like varied crouch height, slow leaning if you only want to half peek a corner for instance, mag checking, chamber checking etc. Unlike other Mil-Sim games though, I feel the controls are smooth and easy enough to learn to not be a hinderance. ARMA as a comparison is complex to a point of frustration, I feel ETF has found a nice balance between complex and still being a fun game. At the end of the day, a game must game and game this game does.

Escape from Tarkov does something truly spectacular. They have delivered a unique spin on the Mil-Sim FPS genre while keeping it fun. The fights are not constant but when they happen you are tossed into a firefight that will have your heart jump out of your chest.

The maps are extremely well done, detailed and believable. In interchange you believe you are in a mega mall, the size scale and detail of every store looks unique. These are the best maps I have ever seen. The only other map design experience that comes close was Hunt: Showdown and you can see my review of that game here.

I am having an absolute blast. If you are looking for an exciting hardcore shooter where your choices and strategies matter, I would highly recommend giving Escape from Tarkov a try.

One thought on “Escape from Tarkov Beta Review”